I was heart-broken, it is true, and yet I was not quite so far gone as to wish to be frozen to death.

So says the "traveller" in The Holly Tree, one of Dickens's lesser-known "Christmas Books." After the success of A Christmas Carol, Dickens spent a few years writing a new Christmas story every year. The results were never as good as the first one, though Cricket n the Hearth and The Haunted Man are still adapted for stage and screen pretty regularly.  He eventually got fed up with the whole process and quit, though he did still put out big Christmas editions of the various magazines he edited, many with original material. By the mid 1850s, these "christmas specials" were collections of short stories that were vaguely connected by a story at the beginning and end that functioned as a framing device. Dickens would write the framing device and one of the stories, and friends such as Wilkie Collins would write the other stories.


For pages and pages, the guy just thinks about inns and the weirdoes he meets in them and the stories they've told him. It may sound dull, but the descriptions are so picturesque and inviting that they're a real pleasure to read, and the stories he relates of them are charmingly odd and gruesome.  There's a hotel room left haunted after a suicide, a parrot who says "wipe up the blood," a guy who's afraid of stonehenge, a guy who gets his head chopped off, and all sorts of wonderful things. I actually wish some of them were longer, which is sort of rare in Dickens.

At one point, the traveler turns his mind to Welsh inns, and then to the Highland Inns in Scotland - "with the oatmeal bannocks, the honey, the venison steaks, the trout from the loch, the whisky, and perhaps (having the materials so temptingly at hand) the Athol brose."

So - Athol Brose. There we have a new drink. Like many of these old-fashioned drinks, no two recipes in circulation seem to agree on how to make it (even the spelling, Athol vs Atholl, has never become standardized - the 15th century nobleman for which it was named probably spelled his name both ways).  Some just make a simple mixture of liquor, honey and cream, but this is leaving out the "brose" altogether. "Brose" is a fancy word for oatmeal water - water that's been steeped in oatmeal for some time, then strained when it's good and oatmeal-flavored.

I didn't blame most modern mixers for leaving the oatmeal part out, after my experience with caudle, but a strained version seemed more drinkable, and it ain't brose without the brose. So I gave it a shot, combining a few recipes into one. It was cold night in Chicago, cold enough to make The Beacon tavern feel like The Highlands on a freezing winter's night. Good night for Athol Brose. Drink like Wilfred Brimley, yo. 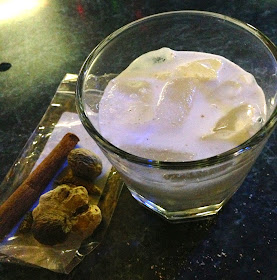 Create the "brose" by soaking 1 part oatmeal and 3 parts water in a saucepan overnight or all day long, then straining it out, so you're left with a murky beige water that tastes like oats. Put this in a fresh saucepan and add some honey - about a tablespoon or so per cup of brose. I went with about half a cup of brass.

Bring the honey and brose to boil to mix the honey in, creating a sort of oatmeal/honey syrup, then remove from heat before strirring in the heavy cream. You don't want to boil the cream. Mix all of this well, put it into a sealed vessel, and refrigerate for some time.

When you're ready, remove it from the fridge. Take a whiff and you'll wonder what you've gotten yourself into this time. The brose and cream mixture smells pretty harsh.

Spoon the mixture onto the scotch in a nice goblet, then top with the nutmeg, if desired. It's meant to be served cold, which is odd for a winter drink, but you can try heating it up if you like, too. I found that it was best over ice, even though it was a chilling 7F outside at the time and I would have preferred something hot. It was a tasty enough drink - it reminded me of eggnog, but with a distinctly "breakfasty" feel, as if the Carnation had started making an eggnog flavor of their Instant Breakfast. Not bad.

This is one of only several drinks that appear in The Holly Tree. Early on the traveler stops at a place called the Peacock where everyone is drinking hot purl, and when he speaks of American inns, he mentions sling, cocktail, julep and cobbler, all of which also come up in American Notes, Dickens's diary of his first trip to America. All those are coming up here soon.